Congress Should Act Immediately to Secure the Border

“I joined President Trump in McAllen today and I truly appreciate him coming to Texas to underscore the crisis at the southern border and immediate urgency of his border security plan. It is time for his opponents to put aside the partisan games and address this very real crisis. The president’s comprehensive plan to build a wall where it is needed, along with additional funding for narcotics detection, additional detention beds and additional immigration judges to handle the deluge of asylum applications and immigration cases, is critical to Texas and the country and Congress should act immediately to fund it.” 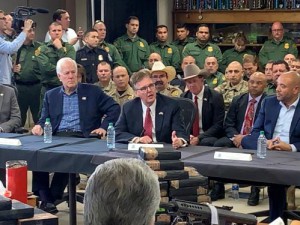 Illegal immigration costs Texas taxpayers billions of dollars every year in healthcare, education and law enforcement as well as direct spending on border security. In 2018 alone, over 500,000 illegal aliens were apprehended crossing the border illegally — 300,000 of those were in Texas. Law enforcement experts confirm that these numbers represent only 20-25% of the people entering our country illegally.