Thanks for taking a moment to read about my work as your Lieutenant Governor. This was another busy week. I took to the airwaves to defend the state’s effort to close abortion clinics, toured the port of Beaumont to learn more about our economy and continued to educate Texans about this November’s state ballot propositions. Keep reading to learn more about these important issues and events.

I joined Fox News Host Neal Cavuto this week to explain why Texas’ decision to eliminate taxpayer funding of Texas’ Planned Parenthood facilities is not the same as efforts from other states that have been unsuccessful. I explained to Cavuto’s national news audience that this is not a political battle but a continuing effort to provide real women’s health. That’s why we put $50 million more for women’s health in our current budget which was approved by both the House and Senate and signed into law by the Governor. The Office of the Inspector General within the Health and Human Services Commission has notified Planned Parenthood Gulf Coast, and their Texas affiliates, that their enrollment in the state’s Medicaid program is being terminated due to a series of alleged violations. The termination letter also points out “there are thousands of alternate providers in Texas,” which will prevent any disruption of access to care.

Click here to read my press release on the issue. 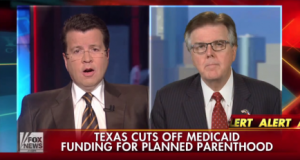 Tour of the Port of Beaumont

On Tuesday I had the opportunity to tour the Port of Beaumont. It is the busiest military port in the world that processes U.S. military equipment. It’s the 4th busiest port in the country following the Port of South Louisiana, Port of Houston and Port of New York/New Jersey Port Newark. With the expected completion of the Panama Canal in 2016, I have charged the Senate’s Transportation Committee with studying the demand placed on Texas ports and whether we have the adequate infrastructure to compete with the global market. 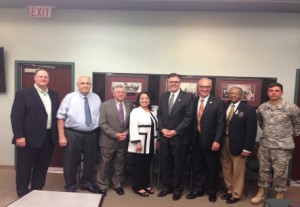 As early voting starts this week, Texans now have the civic responsibility of voting for real property tax relief, a more transparent government and reliable transportation funding. We have seven very important propositions on the Constitutional Amendment Election ballot in November, so make sure to take advantage of voting early in your county of residence and do your part to make Texas a better place.