I appointed five senators to study border security, to include Co-Chair Senator Brian Birdwell, Senator Eduardo “Eddie” Lucio Jr., Senator Carlos Uresti, Senator Bob Hall and Senator Charles Perry. Through this study and working alongside the Department of Public Safety, we are continuing to move forward in securing our border. The federal government has not taken responsibility for what should be a national issue; so, here in Texas we are taking matters into our own hands. This committee will help manage and implement necessary resources to ensure our homeland is not breeched on the Texas/Mexico border.

Find out more from my press release.

Co-Chair Senator Jane Nelson, Senator Charles Schwertner, Senator Brian Birdwell and Senator Juan “Chuy” Hinojosa are the appointees to this vital committee. The groundwork for this study is to restructure five existing health care agencies into one. Merging into one agency will achieve more accountability and promote efficiency in our state government. The agency will be held to the highest standard, thus improving the well-being of all Texans.

Read more from my press release. 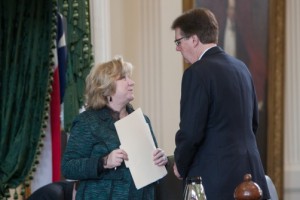 The Joint Interim Committee to Study a Coastal Barrier System

The appointees studying a coastal barrier protection system are Co-Chair Senator Larry Taylor and Senator Lois Kolkhorst. This committee will study the creation of a barrier system that will protect the people most vulnerable to hurricanes and other damaging weather events. The system would include a series of gates and barriers to prevent storm surge damage to gulf beaches or coastal ports, industry, or property. Time and again, people here and all across the world are unprepared when natural disaster’s strike. Hopefully, with the results from this study, we will be equipped for anything that might come our way. 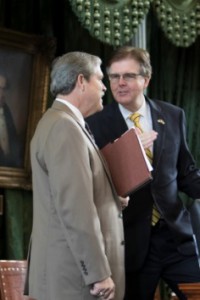 Lt. Gov. Patrick and Sen. Taylor converse on the dais in the Texas Senate chamber during the 84th Legislative session.

Back in West Texas

This week, I traveled to West Texas, and met with business leaders, in addition to speaking with local media outlets. This was my first time back in San Angelo since 1980. I continued my high praises of the 84th Legislative session, calling it the most successful session in the history of the Texas Senate. While in San Angelo, I was able to note the tremendous increase in border security funding, the reduction of property and business tax and the defense of life and traditional marriage, among many other accomplishments this legislative season. I will be making my way to Lubbock on Friday to continue meeting with business leaders and news organizations.

Aftermath of the Wimberley Floods

Fire Chief Carroll Czichos of the Wimberley Fire Department visited my office in the Texas Capitol to present me with a “thank you” coin. It was an honor to receive appreciation for my visit to Wimberley and support of their community following the tragic floods in late May of this year. It’s great to hear the community is working together to rebuild and get back on their feet. 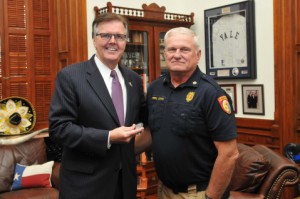