It’s hard to believe more than two months have passed since the historic 84th legislative session came to an end. Your Texas Senate and I worked hard during those 140 days to accomplish what you voted us into office to achieve. By many accounts it is considered to be one of the most successful legislative sessions in the history of the Texas Senate. Although the session is over, rest assured, our work is far from over. I have continued to pave the path that will lead to the attainment of Texas’ priorities and I’d like to share with you some of my activities in the recent weeks of the interim:

There have now been five videos released on the selling of aborted baby parts by Planned Parenthood and each time they become more gruesome and heart-wrenching. There is no other explanation for this barbaric treatment than unacceptable. Our country will not stand for this, no matter if you are pro-life or pro-choice. No one that I know of, who has any moral foundation, would justify what is allegedly happening in these Planned Parenthood centers. I have called on Harris County District Attorney Devon Anderson to immediately initiate and pursue a criminal investigation to make sure no laws are being broken. Anderson announced her investigation is underway on Wednesday, August 5. Texans deserve to know if Planned Parenthood is illegally profiting from selling fetal body parts. If they are, they will be held accountable. 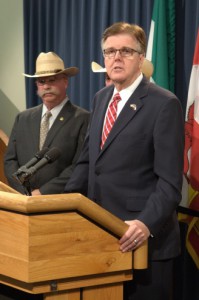 Texas is founded on total transparency and in a case such as this, that’s exactly what we need and I have insisted we will obtain. On July 21, I attended an official briefing with the Department of Public Safety, Waller County District Attorney and Waller County Sheriff’s Department at Prairie View A&M University to learn the latest details in the death of Sandra Bland. The day before the briefing I met with the Bland family alongside other state officials, including Senator West and Senator Kolkhorst. During a news conference following the briefing, I also made it clear that too often in this country there is a rush to judgment before all of the facts are in, but I trust we are going to find the truth, no matter where it leads. 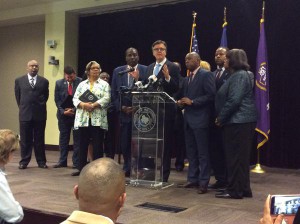 TMPA, better known as the voice of Texas law enforcement, graciously invited me to be a keynote speaker at their annual TMPA Conference in Austin. It was an honor to speak with several hundred municipal police officers who put their lives on the line every day. I have made clear that we as citizens have high expectations of our men and women in law enforcement, and they deserve respect. I’ve said before and will say again, we have their backs because we know they have ours. In Texas we are grateful for the men and women who protect us every day. 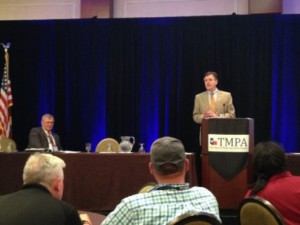 I joined the Texas Sheriff’s Association in a press conference to announce their participation in a national initiative by sheriff departments across the nation, who are concerned with an executive order made by President Obama to replace the Secure Communities program with a new program called Priority Enforcement Program (PEP). Some law enforcement officials believe PEP makes our communities less secure from criminals who come to America illegally. The program went into effect in early January 2015 and is failing Texas and is failing America. Now, federal law enforcement officers may transfer a criminal who is here illegally, only under certain circumstances and under their own interpretation. This gives too much discretion to the agents, who could potentially allow multiple illegal criminals to slip through the cracks. In the last session we were one vote short in banning sanctuary cities. We will not fall one vote short next session and the Senate will pass legislation to ban sanctuary cities in Texas. Securing our border is a federal government responsibility and because they have not met that responsibility, it has become Texas’ problem. This is not acceptable. This session, the Senate increased border security funding from nearly $300 million to $800 million. National security starts with border security and border security begins in Texas. 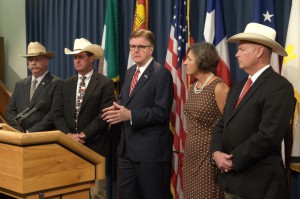