The passage of these three bills propose the following:

Senate Bill 11 (SB 11) by Sen. Birdwell – This bill relates to the carrying of handguns on the campuses of certain locations associated with higher education institutions.

Senate Bill 17 (SB 17) by Sen. Estes – Authorizes a person who is licensed to carry a handgun to openly carry a holstered handgun; creating a criminal offense and providing penalties.

Senate Bill 273 (SB 273) by Sen. Campbell – This bill will deal with certain offenses relating to carrying concealed handguns on property owned or leased by a governmental entity; also providing a civil penalty.

This is the first time gun legislation, of this caliber, have made it out of committee and onto the Senate floor for a vote. I’m proud of our senators for their hard work and focus on these important issues. 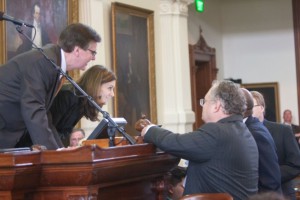 Leading the Charge on Tax Relief

Next week, the Senate Finance Committee, chaired by Senator Jane Nelson, will vote on three bills that will bring tax relief to all Texans.

Senate Bill 1 (SB 1) by Sen. Nelson, et al. – This bill proposes to double the homestead exemption, saving homeowners hundreds of dollars. It will bring the first change and increase in nearly 20 years.

Senate Bill 7 (SB 7) by Sen. Nelson, et al. – Cuts franchise taxes by 15 percent across the board and makes compliance easier and less expensive for businesses under $10 million.

One of the Senate’s major priorities, Senate Bill 3 (SB 3) by Sen. Birdwell, made it out of committee this week and will be voted on by the full Senate next week.

SB 3 ensures that the State of Texas continues to secure our southern border through the use of the Texas National Guard and the Department of Public Safety.

It is important to keep the Texas National Guard in place along the border until new Department of Public Safety troops can provide a more permanent solution to secure our border. 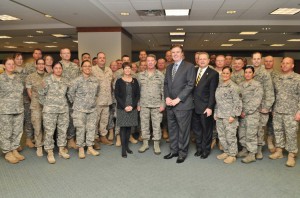 I also invite you to visit my website often, and to bookmark the address, at www.ltgov.state.tx.us. Tell your friends and help us spread the word.